Still breezy, although the westerly wind was nowhere near as strong as yesterday allowing most of the nets to be opened where we managed 50 new birds comprising the usual spread of migrants with the first Wheatear to be ringed this year the only unusual species.   Raptors were again obvious over the garden as 8 Honey Buzzards, 30+ Sparrowhawks, a couple of Marsh Harriers and several Kestrels were counted through the morning along with good numbers of Tree Pipits and a flock of Crossbills heard but not seen.   Also of note were 5 Wheatears and a juvenile Red-backed Shrike in the front field. 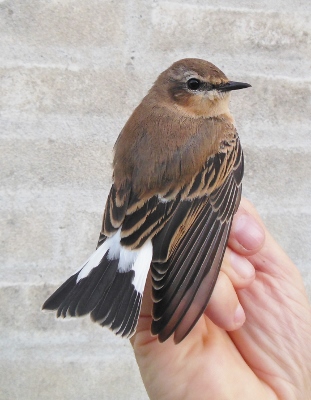 I had a little look out on the point straight after we’d closed the nets at lunchtime but there was no evidence of any raptors passing over the tip but quite a few Sparrowhawks and Kestrels were again cutting SW over the fields completely avoiding the tip so I again went out and watched for a while over the fields just north of Birkemose where there was a dark juvenile Honey Buzzard, a couple of White-tailed Eagles, 3 Marsh Harriers and small numbers of Sparrowhawks and Kestrels but they were passing on a very broad front and often cutting back and turning round so very difficult to get an accurate count.