The blazingly strong wind remained but had shifted slightly to the north which, with more cloud and occasional drizzle produced a bit of a different day; the ringing was a bit of a struggle in the wind but we managed 97 new birds largely due to a good influx of 36 Dunnocks and a few Finches.   One of the Firecrests from two days ago was also re-trapped. 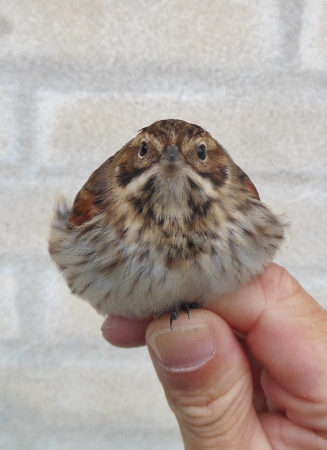 The ringing total was by no means respective of how many birds were passing low over the garden, it was a spectacular morning with tens of thousands of mainly Finches heading east in huge flocks; the bulk was predictably made up of Chaffinches, Bramblings and Siskins but the flocks overhead contained good numbers of Reed Buntings, Linnets, Redpolls, Meadow Pipits, Song Thrushes and Redwings along with many Dunnocks calling high up in the sky.   Other notable birds picked out through the morning included 70+ Mistle Thrushes, 5 Woodlarks, 3 Grey Wagtails and a Rock Pipit while a single Rough-legged Buzzard was also seen.

Wildfowl also continued to move with big flocks of Barnacle Geese still heading south (with a huge flock of 1,400+ feeding in stubble fields on the edge of town) but also today there were several decent flocks of White-fronted Geese also heading south while Eiders, Wigeon and Brent Geese carried on piling through offshore – another awesome vis mig day!

Nothing really happened in the afternoon as the drizzle became heavier making it difficult but there were still plenty of birds at Kroghage but nothing very exciting with a single Redstart and 7 Grey Plovers the highlights in amongst the Robins, Chiffchaffs and Goldcrests.