A decent day, fairly bright but with a brisk and very cold northerly wind; the feature of the morning was an excellent influx of 80+ Northern Bullfinches, at one stage the whole garden was full of their deep, musical calls – awesome!   We managed to catch 18 of them, they were all huge birds with wing lengths up to 98 and weights up to 37.8g – neither of which the computer liked!

The day`s ringing total was a good 150 new birds, largely made up of a big catch of Redpolls with the aid of playback after the standardized session had finished; they were a real mixed bunch of birds from small dark Lesser Redpolls with wing lengths of 68 to huge, white Common Redpolls, one with a wing length of 82 (the computer didn`t like that either!).   The proportion ended up with 67 Common Redpolls and 47 Lesser Redpolls although some were more or less guessed at as they were in the middle of colour and biometrics. 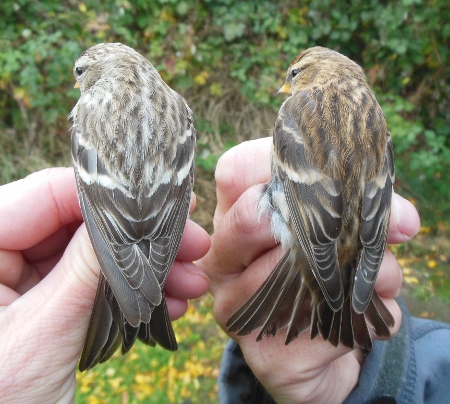 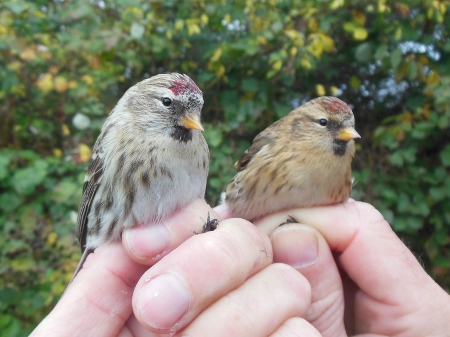 These two Redpolls were both very small (with a wing of 70mm); so is the bird on the left a very small Common Redpoll or a very pale Lesser Redpoll.....

There was also a bit more action overhead through the morning with increased numbers of Chaffinches, Bramblings, Siskins, Goldfinches and Greenfinches heading east along with a Grey Wagtail, 200+ Woodpigeons, a couple of Waxwings heard, 2 Mistle Thrushes and a few Yellowhammers and Reed Buntings.   Wildfowl were also obvious (reflecting the passage offshore) with 10+ Whooper Swans, 16 Bewick`s Swans, 20+ Tundra Bean Geese and the odd Goldeneye and Wigeon whizzing over.

A little walk mid-afternoon north along the coast was fairly quiet with 3 Little Gulls, a few flocks of Red-throated Divers and ducks still passing offshore and 12+ Curlew feeding in the fields. 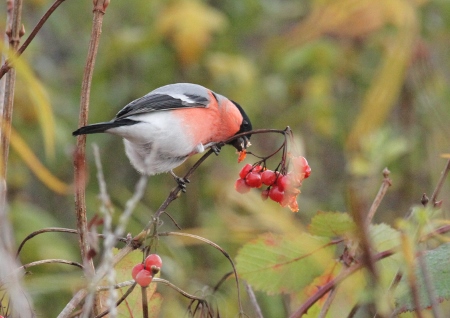