To say today was wintery would be an understatement with on and off light snow (more on than off) throughout the whole day, leaden overcast skies and a bitingly cold northerly wind.   With increased checks though we were able to ring for most of the day until the snow turned very heavy mid-afternoon; there was a similar spread of species as yesterday with another little influx of 30+ Northern Bullfinches (we caught 12) and again big numbers of Common and Lesser Redpolls caught after the standardized ringing had finished (ended up with 91 Common and 39 Lesser Redpolls).

The decent total of 163 new birds did include however some high quality birds especially the (probable) 2 COUE`S ARCTIC REDPOLLS caught in amongst the masses of other Redpolls (there was no question about the first bird but the much whiter, second bird was a bit less definitive being almost too white around the face and underparts if that doesn`t sound too counter intuitive!).   Other good birds caught included the third Great Grey Shrike of the autumn, a Mistle Thrush and a late Chiffchaff. 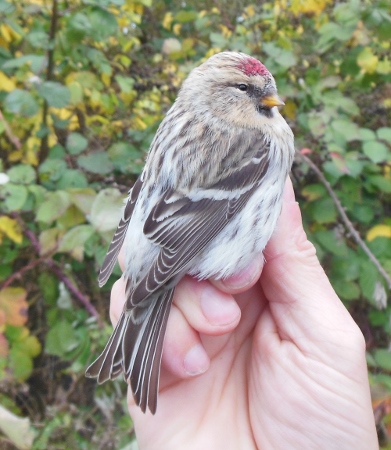 I didn`t really leave the garden but there were a few oddities around through the day including a very late Wheatear on the beach by the car park, a Great White Egret which flew over during a particularly heavy snow shower, a flock of 22 Waxwings which thought about landing but didn`t and several groups of Whooper Swans over.

More pictures and notes about the second Arctic Redpoll at www.wykebirding.blogspot.com