After being caught out by half an hour of heavy rain just after opening the nets it turned into another warm and sunny day; the first net round after the rain promised much with a good mix of Warblers caught but it very soon fizzled out and we ended up with 6 Icterine Warblers and 3 Marsh Warblers amongst 22 new birds.   The Serin was still flying around and the Grey Partridge family was still in the front field. 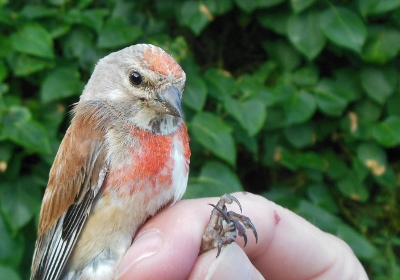 After closing the nets late morning we had a look over at Bøtø where there were a good selection of things including a White Stork flying around, a Great White Egret, the pair of Cranes, an immature White-tailed Eagle, 2 Garganey and a selection of waders with 4 Wood Sandpipers, 4 Greenshank, a Little Stint and a fine adult male Ruff of note.

We then drove over to a couple of sites in the north of the neighbouring island of Lolland where the main species seen were waders with 6+ Curlew Sandpipers (Majbølle) and 4 Grey Plover (Rommes Nakke) both being Danish ticks for me along with good numbers of Dunlin, Ruff, Wood Sandpipers, a couple of Black-tailed Godwits, Greenshank (100+ at Rommes Nakke), Redshank, Golden Plover etc.   Other birds included another Garganey at Majbølle, some Bearded Tits and plenty of Red-necked Grebes.