Yesterday’s bit of rain and general change in the weather to a SW wind with plenty of dark, threatening clouds seemed to do the trick with a good 56 new birds caught in the morning including 21 Marsh Warblers, 9 Icterine Warblers and 14 Lesser Whitethroats – most of them came early on with numbers dropping off rapidly after the first few rounds. 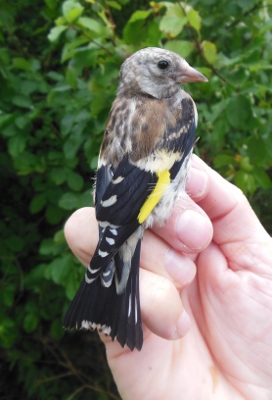 Closed the nets late morning in anticipation of the heavy rain that never arrived so two hours out on the point (1115 – 1315) produced a good selection of birds heading SE including a smart adult Caspian Tern, 14 Black Terns, an adult Little Gull, 59 Arctic Terns, 10 Common Terns, single Grey Plover, Golden Plover and Curlew and some ducks with 624 Common Scoter, 5 Teal and 5 Tufted Ducks counted.

It was then straight up the road to Bøtø where, in a field just to the north of the reserve there was a smart adult DEMOISELLE CRANEroosting with 2 Common Cranes – the seventh record for Denmark and the first since 1992 (however wild it may be….); it showed well in the scopes but a bit distantly for anything else. 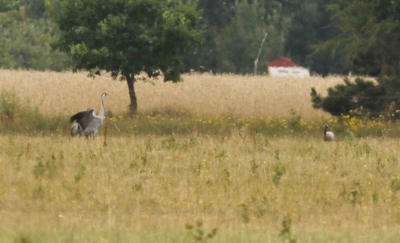 Demoiselle Crane making friends with the resident Crane pair; there was one in Cumbria and then Northumberland (northern England) from April through to the 10th July, its more than likely the same bird which, in the UK was instantly put down as an escapee (although we are notoriously harsh on birds of questionable providence!).   All the 40+ Danish twitchers at the bird today were quite happy that it was wild but who is to say who is correct......