A quieter day but still sunny with a brisk easterly breeze; the nets produced 2 Marsh Warblers, 5 Icterine Warblers (for the 3rd day in a row!), another juvenile Black Redstart and 2 Redstarts amongst 34 birds caught.   A party of 6 Crossbills flew through and a couple of Whimbrel went over. 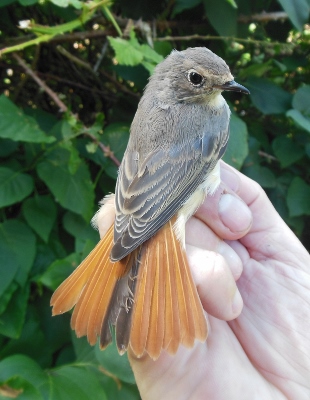 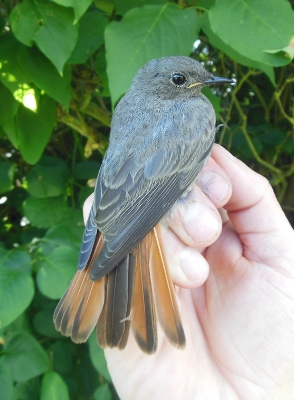 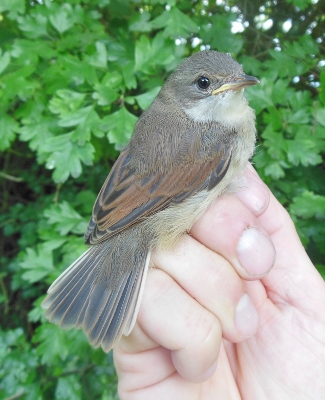 The Point was very quiet in the afternoon so a little drive up to Bøtø produced a Wood Sandpiper, a Green Sandpiper, 3 Ruff, the pair of Cranes, a few Marsh Harriers and some Red-necked Grebes.

First day of the autumn!

A glorious, hot, sunny day for the first session of autumn standardised ringing brought a very similar array and quantity of birds as yesterday to the nets including another 7 Marsh Warblers and 5 Icterine Warblers (plus a re-trap from 2012) along with juvenile Redstart and Black Redstart (there were two others in the garden as well).

A Grey Wagtail was in the garden mid-afternoon before a look from the point for a couple of hours (1530-1730) produced 342 Eiders, 5 Teal, 5 Common Scoter, 24 Whimbrel and 40+ Arctic Terns fishing offshore while there were 22 Dunlin and 6 Common Sandpiper on the beach. 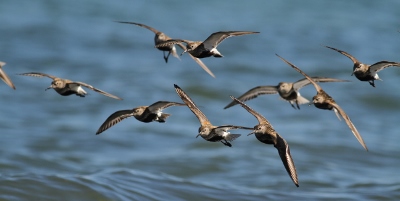 Dunlin on the point 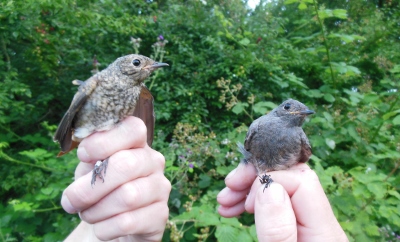 A good comparison of juvenile Common Redstart and Black Redstart

A similar looking day produced a few different little bits in the nets indicating some early passage including 7 Marsh Warblers (all adults and some had high fat scores showing them to be proper migrants on the way back south), 5 Icterine Warblers, a Wood Warbler, a Treecreeper and another juvenile Common Rosefinch while 2 Whimbrel and 2 Dunlin went over to the SE.

We (Gert and myself) then had a very successful little jaunt across to Lolland where we had eventual good views of the GRIFFON VULTURE which has been present at the Naturepark just south of Maribo for the past few days – a real Danish rarity as prior to this record breaking year there had only been six other sightings!   It was also an incredible spot for other raptors with a brilliant 13+ White-tailed Eagles seen together around the main lake (8 sat in one tree!!); the most amazing thing though was seeing the Vulture soaring together with an Eagle and making the Eagle look distinctly average! 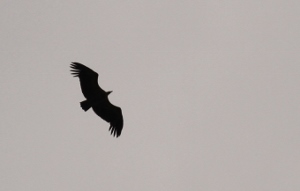 More ringing before the season starts

A bit more cloud through the day but the westerly breeze stayed lightish allowing all the nets to be opened; more of the same was caught including another 10 Icterine Warblers, 2 Marsh Warblers and 3 Common Rosefinches – the first time I’ve seen really fresh juveniles along with a Redstart and a few Whitethroats and Lesser Whitethroats.

A couple of sessions seawatching from the point in the afternoon (13:00-14:30 and 15:45-17:00) produced a few things heading S or SE including a smart summer plumaged Black-throated Diver, a Red-necked Grebe, 140 Eiders, 13 Common Scoter, a Velvet Scoter, a Heron, 34 Oystercatchers, 4 Dunlin, a Ringed Plover, 143 Arctic Terns, 7 Common Terns, a Little Tern and a Cuckoo which flew south along the coast, reached the point and did a huge U-turn out over the sea to head back north.   Also lingering around the tip were 33 Goosanders, a Red-breasted Merganser, 2 Goldeneye and 8 Common Sandpipers. 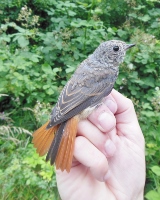 I'm sorry but most of the autumn's blog posts will be in English!

Hello! My name is Simon Davies, an English ringer who will be staying here at Gedser for the whole autumn! [I was also here in spring 2014]
af Simon Davies

Although the season doesn't officially start until the 20th, I wasted no time in getting started and had a very productive morning with the nets catching 55 new birds including 11 Icterine Warblers (mostly adults, indicating perhaps that some movenment is already underway) and a Marsh Warbler.

The rest of the catch was, as expected, mainly juvenile birds of various stages of independance, the totals appear below; 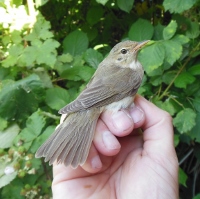 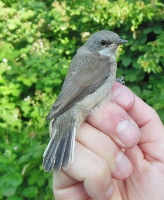