Another rare and unexpected day:  None of us would have guesses that Blackbirds could be the main start of the day with 21 new individuals ringed (plus many more flying too high for our nets). The weather conditions, cloudy and not windy at all, were perfects for a busy ringing day; but unfortunately it got quite earlier than expected as birds suddenly vanished, leading a total of 50 new individuals ringed and 13 different species. If, anyone knows where they have gone, just please tells us; because it's still being a mystery ;)).

Today highlights have been the Mistle Thrush as it always surprises me how large and bulky are on the hand comparing to others thrushes;  the Yellowhammer which doesn't sound exotic for you but I'm from Spain where  the Cirl Bunting are the common one ;),  and the Northern Bullfinches as there are never enough to get tiring of them. 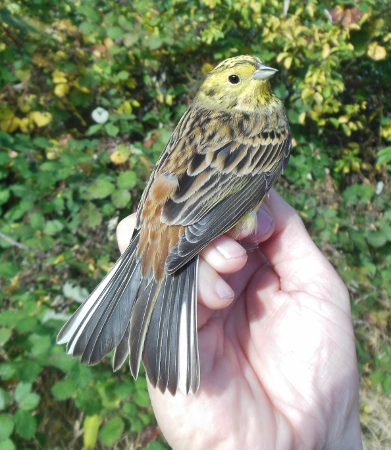 Hopefully, we'll have a busier day tomorrow and looking forward to see what tomorrow will bring us.

Due to the strong winds, we have enjoyed another slowly day with just 21 new birds ringed. Surprisingly, Long-Tailed Tits (mainly aerupeaus spp.)  have been the most abundant species with 10 individuals!!! and of course they have been the main start of the day, along with the Firecrest. 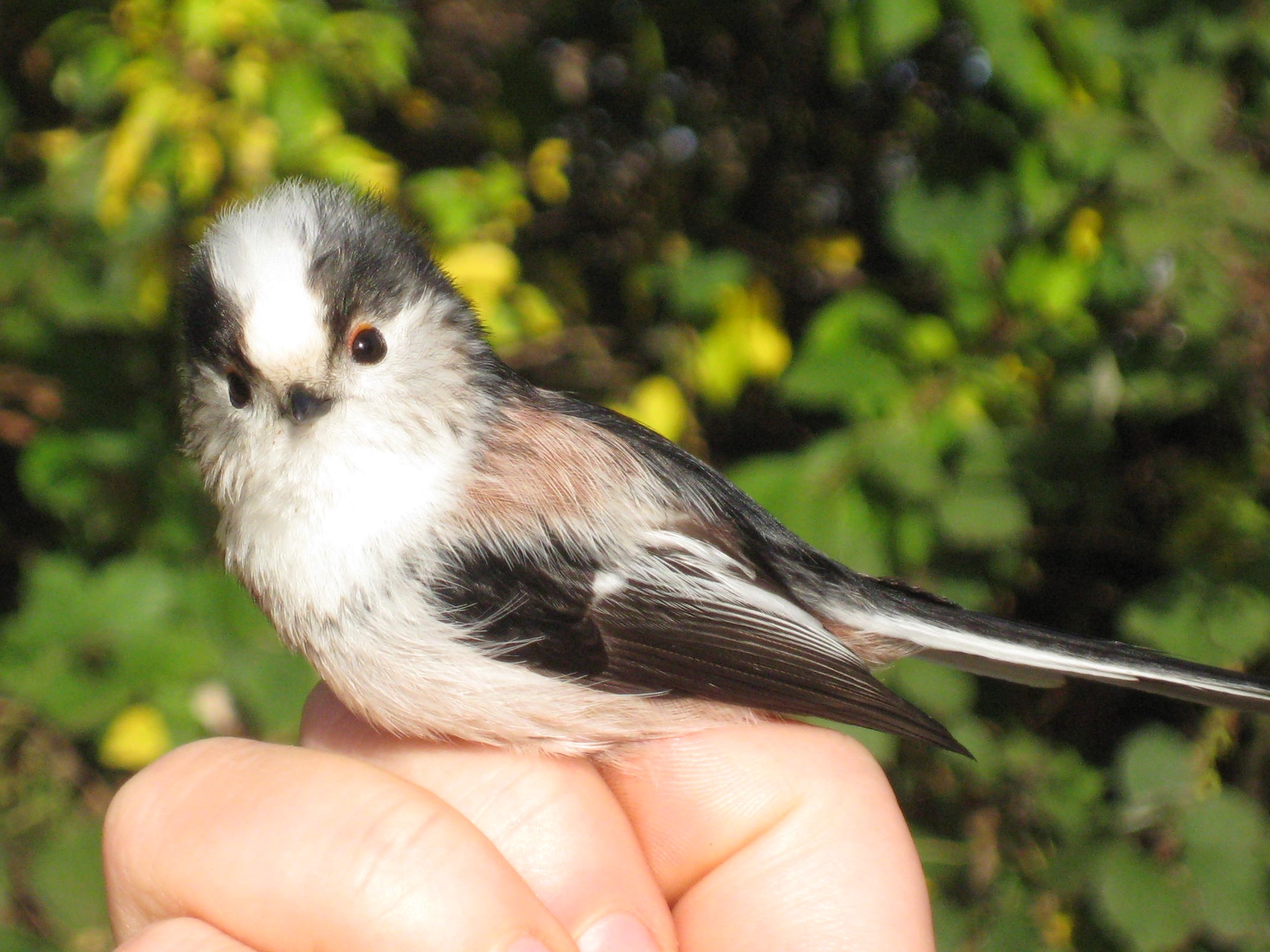 Despite of these low figures, during the early morning there have been more activity around our garden than the last two days with at least 10 Sparrowhawks, 1 Kestrel and 3 common Buzzards, and smalls flocks of Siskins, Bramblings/ Chaffinches, Greenfinches and Bullfinches. Any bird was flying too high, so unfortunately most of them haven´t found their way into the nets.

Hopefully tomorrow  weather will be better and there will be more birds moving around the garden but closer to the land!!! And why not some interesting/cute/special bird can end up in our nets like Waxwings ;). 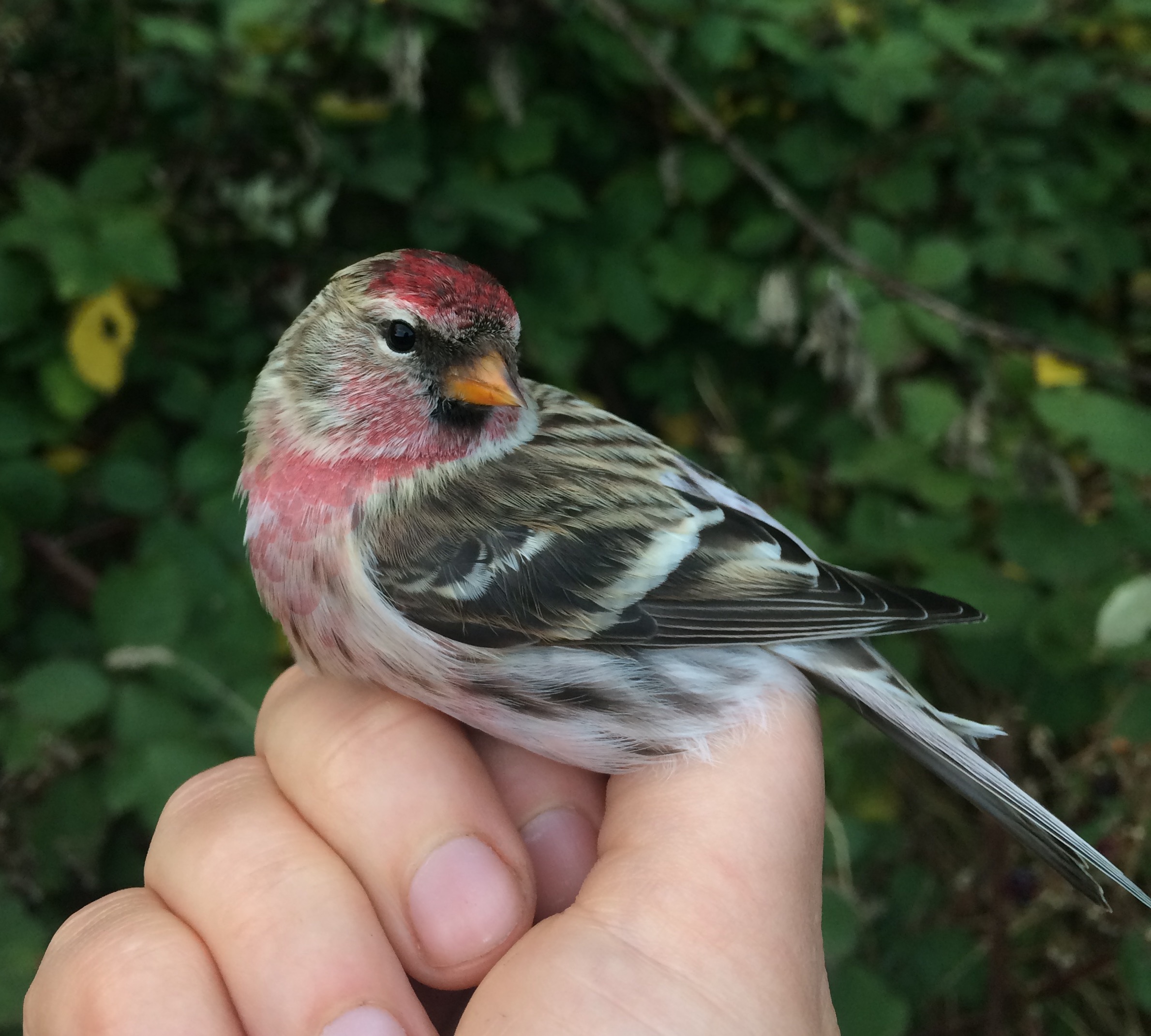 Sorry for the delay. Yesterday we had a few issues with the Internet and I didn´t manage to upload the blog. Anyway, better late than never ;).

As we expected the day was not very  fruitful (too windy!!!!) in numbers with just 64 new individuals ringed, being the Robins the main star without any doubts (45 banded). However, we had four amazing surprise along the day, starting with the first Long-eared Owl for the year during the first round. In fact, I was still a bit half-asleep when we made the owl to fly away, so it took me a few seconds to realize which bird could be, and the most important, that we could have one owl on the nes¡ts.  After this,  I run and checked all the nets close by until I found it on one of them!!!! :) 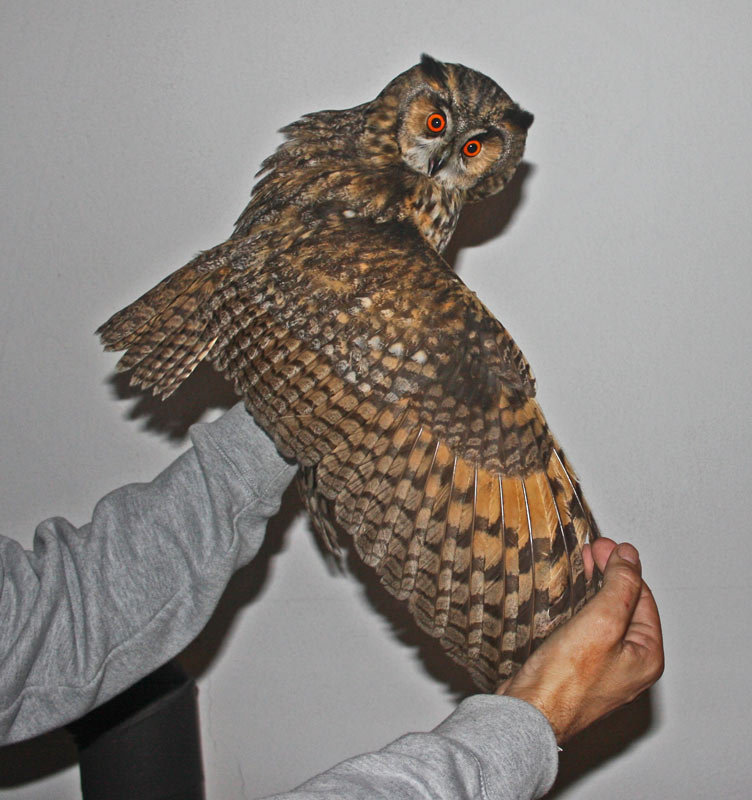 One hour later, Simon came really happy with the second surprise: a nice Lesser Whitethroat with a "funny" looking, which made Simon to think that it can be from the Eastern population. In fact, it looked totally different from any other Lesser Whitethroat seen before. Although it needs to be confirmed, we´re quite optimistic about it and it looks quite promissing ;). What do you think??? 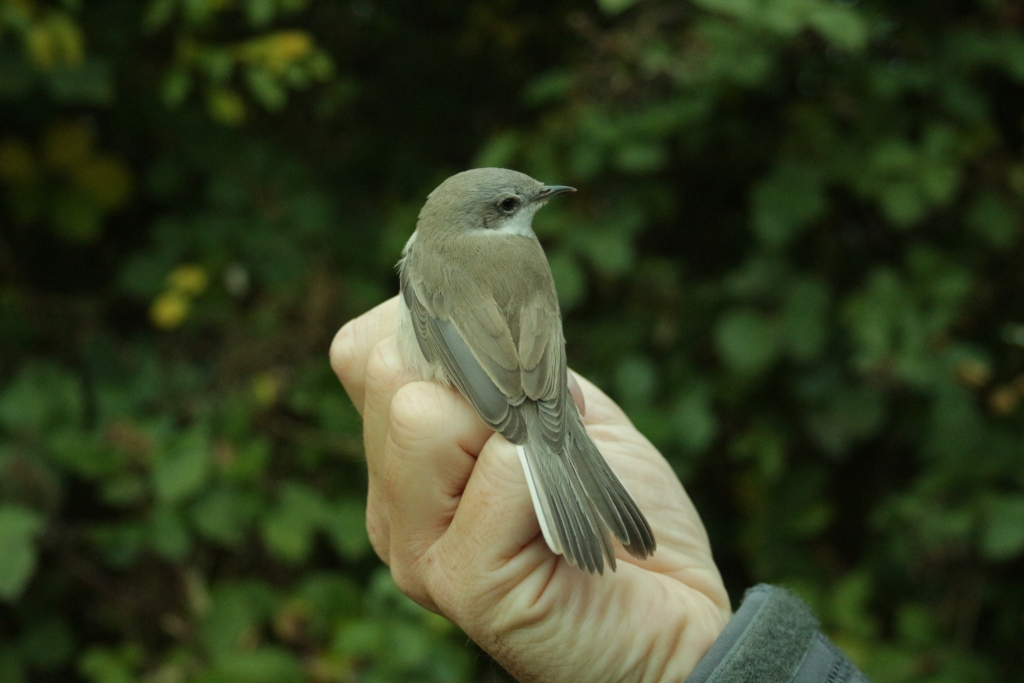 The third one was a Ring Ouzel juvenile, totally unexpected as noone had heard it around the garden for the last days.  In fact, Lars and me were just talking about which species he would like to ring and the Ring Ouzel was a lifer for him!!! No anymore!!! 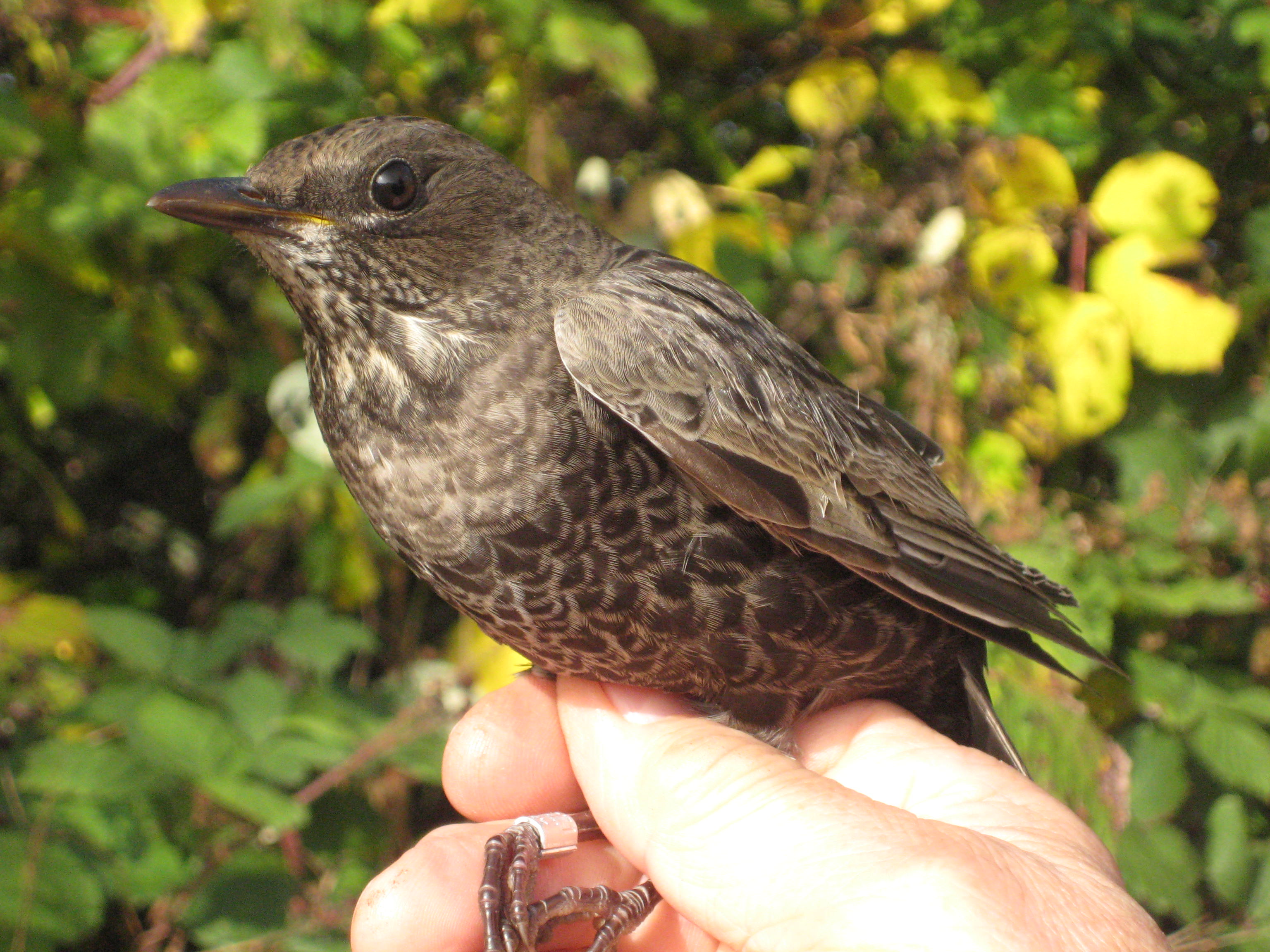 The last but not the least, it happened when we decided to close because it got really slowly and we´re just having Robin controls. So, no more exciting when suddenly I found an amazing Sparrowhawk female trapped and of course I had to run again before it could scape it!!! And I asked for helped because it was also the first time to handle an Sparrowhak and to ring it!!! 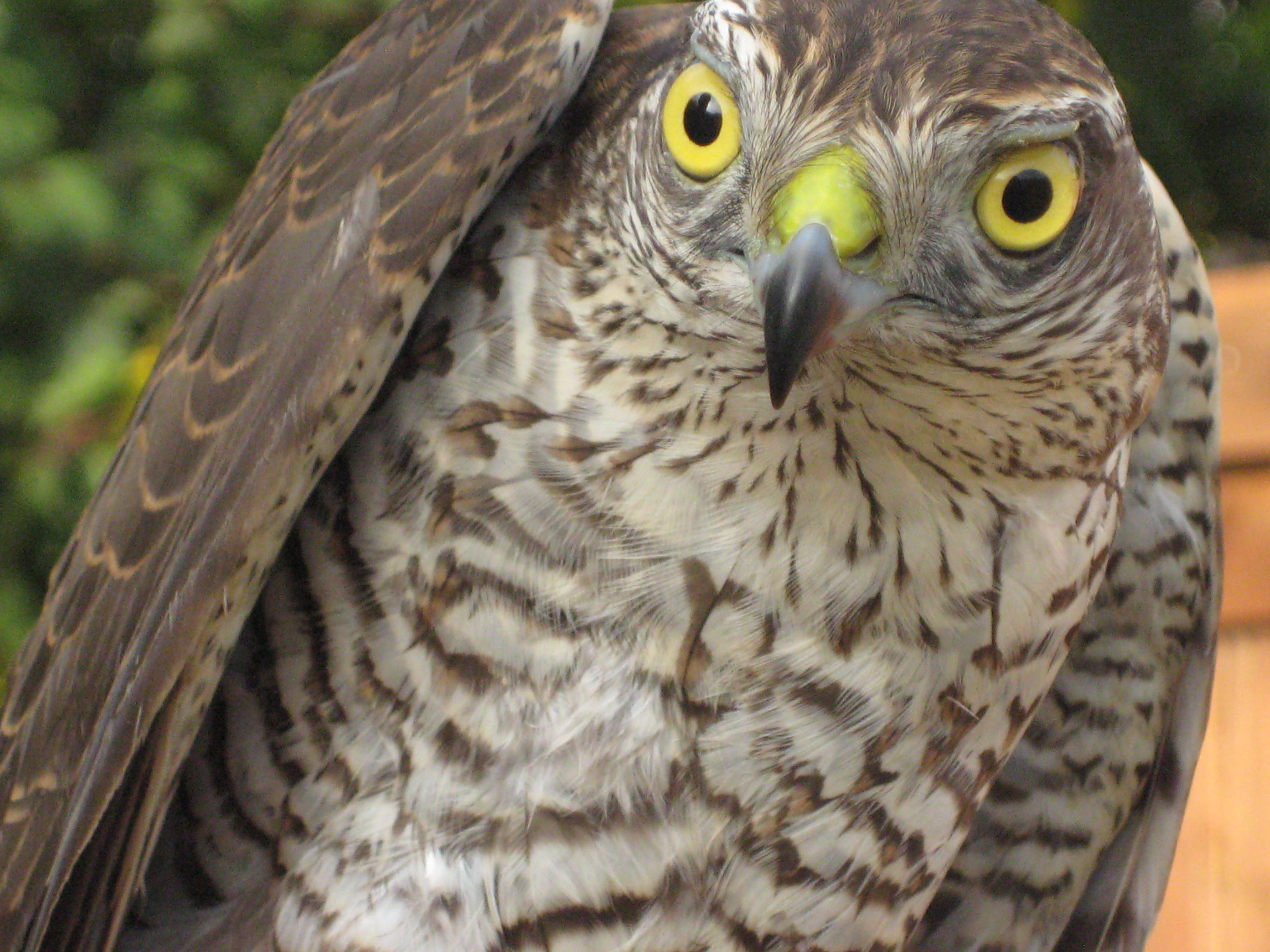 In other words, we had a great ringing day despite of the low numbers!!!!!

We have enjoyed another  sunny and "dominguero" day with a total of 345 individuals ringed and 16 different species. Unlike previous days, Robins have been the main start for today with 173 new individuals ringed, which makes us to think the Goldcrest peak migration is over and it would be a shift to Robins/Dunnocks.

As yesterday, there have been no many birds migrating properly to South instead  small flocks of siskins, bullfinches, redpolls, fieldfares  and redwings were moving around the area waiting for the right wind conditions to cross the sea, and lucky us, some of them ended up in our nets ;).

The most exciting observation was made by Simon: the first Waxwing for the autumn flying over. We did put the playback but unfortunately we have not managed to trap it today, maybe tomorrow is the day. I am really looking forward as I have never seen one at all. It is a real "bimbo" ( or also called lifer) in any sense for me and I would love to see it well or even better to handle it!!

Today we have waked up with a thick fog for the first two hours, making the start really slowly. However, once it's cleared out, we have enjoyed a beautiful spring day with a total of 154 individuals banded and 20 different species. Although the weather conditions have been perfect for ringing, there were almost no birds migrating ( if we compare of course with previous days). It seems that birds prefer to migrate in cloudy/raining and windy days; making our day-to-day ringing more challengeable and unpredictable.

Despite of this, there have been small flocks of Siskins, Goldfinches, Bramblings/ Chaffinches and Blue Tits/Great Tits moving around our garden and keeping us entertained but not too busy ;). We have had also two nice surprises: 1 male Great Woodpecker and 1 stunning male adult Sparrowhawk cheering up our day!!!

In addition, we have also observed 15 Common Buzzards, 1 Rough-Legged Buzzard, 2 Red Kites and few Sparrowhawks flying over our heads, but not really migrating.

A perfect ringing day – calm, partly cloudy with some sunshine in the afternoon but the totals were reduced from the previous week as we seem to have broken the back of the crazy Goldcrest migrations; the total of 351 new birds through the day was still very decent but it was nowhere near as hectic as it has been.   There was still a trickle of 192 Goldcrests caught (mainly in the morning) along with 64 Robins and 27 Wrens while the highlights included a Firecrest, 3 Treecreepers and a female Northern Bullfinch. 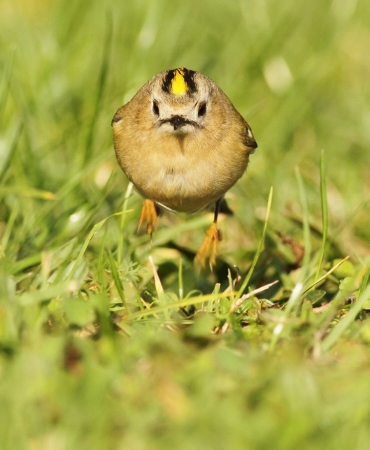 Overhead passage was also much reduced despite the fine weather with just a few small flocks of Finches, Woodpigeons, Rooks and Jackdaws moving through; a flock of 120 Cranes also went over while a few raptors included at least 9 Rough-legged Buzzards, 2 Red Kites, 15 Common Buzzards and quite a few Sparrowhawks.   Other little bits around included my first Long-eared Owl of the autumn in the trees by the house, 2 Hawfinches over, a flock of 20 Pintail heading south, the first Great-spotted Woodpecker for a while and in the much quieter afternoon a great flock of 16 Red Kites which flapped lazily over the garden late afternoon and 2 Red-throated Divers calling as they flew east. 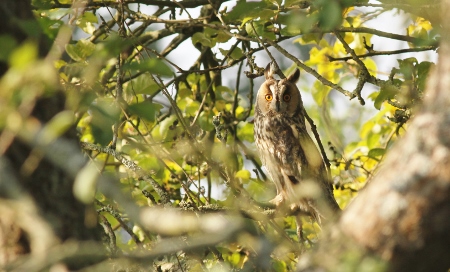 Long-eared Owl in the garden 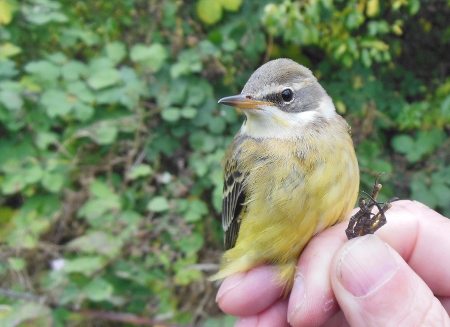 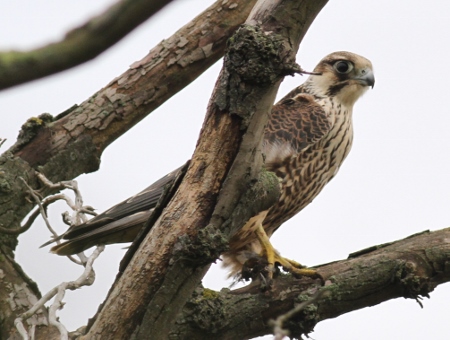